English cathedrals often have grave memorials of great beauty and artistic ability. One of my favourites is a tomb in Chichester Cathedral with effigies believed to represent Richard FitzAlan, 10th Earl of Arundel and his wife Eleanor of Lancaster, who are actually buried elsewhere. He died in 1376 and she died in 1372.

Poet Philip Larkin saw these effigies and was much moved by them. So moved, that he was inspired to write a beautiful poem – An Arundel Tomb. The pair lie side by side, holding hands. He has a lion at his feet, representing courage and nobility; she has a dog at her feet (representing loyalty).

An Arundel Tomb by Philip Larkin

Side by side, their faces blurred,
The earl and countess lie in stone,
Their proper habits vaguely shown
As jointed armour, stiffened pleat,
And that faint hint of the absurd–
The little dogs under their feet.

Such plainness of the pre-baroque
Hardly involves the eye, until
It meets his left hand gauntlet, still
Clasped empty in the other; and
One sees, with sharp tender shock,
His hand withdrawn, holding her hand.

They would not think to lie so long.
Such faithfulness in effigy
Was just a detail friends could see:
A sculptor’s sweet commissioned grace
Thrown off in helping to prolong
The Latin names around the base.

They would not guess how early in
Their supine stationary voyage
Their air would change to soundless damage,
Turn the old tenantry away;
How soon succeeding eyes begin
To look, not read. Rigidly they

Persisted, linked, through lengths and breadths
Of time. Snow fell, undated. Light
Each summer thronged the grass. A bright
Litter of birdcalls strewed the same
Bone-riddled ground. And up the paths
The endless altered people came,

Washing at their identity.
Now, helpless in the hollow of
An unarmorial age, a trough
Of smoke in slow suspended skeins
Above their scrap of history,
Only an attitude remains:

Time has transfigured them into
Untruth. The stone finality
They hardly meant has come to be
Their final blazon, and to prove
Our almost-instinct almost true:
What will survive of us is love. 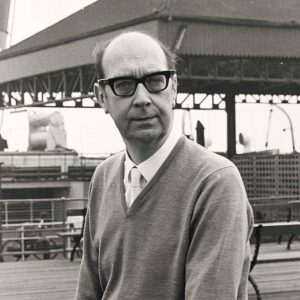 The poem was written in 1956 and published in 1964 as part of his volume Whitsun Weddings. It has remained one of Larkin’s most popular and anthologised poems. Larkin visited Chichester in early 1956 and was so moved by the effigies that he felt he had to write a poem about them.

I think it is one of the great love poems of the 20thC. In the first stanza Larkin introduces the noble couple lying in effigy, and then in the second stanza draws attention to the fact that they are romantically holding hands. In the third stanza he analyses this pose, while the next two stanzas touch on the historical changes that have taken place since they were alive. In the sixth stanza he decides that it is only an ‘attitude’ that has survived from that courtly age of long ago, and the final stanza reveals the idea that love is what survives of all that we do and say in our lives. The poem shows the shift in attitudes between the nobles’ time and our modern age – references to the use of Latin and “old tenantry”, armour and gauntlets, ‘seeing’ rather than ‘reading’ in an illiterate age, remind us of how church services and land usage have changed and how much time has passed.

There is great metrical mastery in this poem, as Larkin, while using a regular form and metre, often surprises us with his use of words and deliberate disruption of metre, eg. the little dog is ‘under’ her feet rather than the more expected ‘beneath’ her feet, adding a slight sense of absurdity. There is a tentativeness about the love described – for example, it is almost true that love endures, and that almost is repeated twice.

The final lines of the poem were inscribed on the memorial stone to Larkin in Poet’s Corner, Westminster Abbey. They are also inscribed on the base of the Chichester effigy that they describe. Evidently Philip Larkin was once there and heard the guide tell a group of tourists that the poem had been written by Philip Spender! This poem was one of the ones chosen for his memorial service.

The Complete Poems by Philip Larkin