When Life magazine did a poll to decide on the 100 most important events of the Millennium, they put in 96th position the publication of Don Quixote by Cervantes. It is often considered the first proper novel, which is a hugely important event. I do not even want to imagine a world before fiction was available. I have just been reading a fascinating book, Quixote: The Novel and the World by Ilan Stevens, an American academic. Cervantes died 400 years ago this year (he died on 23 April, 1616 (the same day as Shakespeare died, but Spain was using the Gregorian calendar and England the Julian calendar, which means Cervantes actually died the day before – what a loss to literature those two days in 1616 were!), so this makes it an appropriate time to read Don Quixote or books about it.

When the Norwegian Academy of Science and Letters asked writers around the globe what the greatest novel was, Don Quixote won by a landslide. An asteroid has been named Don Quixote, a supermarket chain in Japan has been named after him, the novel has created a tourist industry, and its influence has been incalculable – Hemingway, Goethe, Freud, Dostoyevsky, Fielding, Faulkner, Joyce, Kafka, Steinbeck, Melville, Flaubert, Smollett, Nabokov, Turgenev, Borges, Salinger, and the list goes on. The book has inspired artists, musicians and countless authors.

I loved reading this book by Ilan Stevens. He shows the huge impact of the novel, has an interesting chapter on the various translations into English (providing the same paragraph in Spanish and then in 12 different translations, which shows how much a book can be changed by a translator), and he discusses what it is that makes the novel resonate in so many different cultures and eras. Critic Lionel Trilling once said that “all prose fiction is a variation on the theme of Don Quixote.” It is a wonderfully funny novel, and it is deeply wise. It is a novel about the power of fiction, about reason, about friendship, about travel, about chivalry, and about life. If you have never read it, then 2016 is the perfect year in which to do so, as the world celebrates this truly remarkable book. Here is the intriguing first sentence to start you off …

“In a village of La Mancha, the name of which I have no desire to call to mind, there lived not long since one of those gentlemen that keep a lance in the lance-rack, an old buckler, a lean hack, and a greyhound for coursing.”

Here are two sculptures I own of Don Quixote: 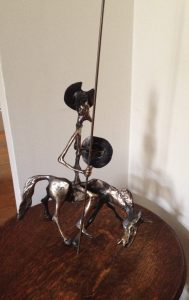 Try it on audio version and you will laugh aloud as you listen – it’s about 36 hours of pure listening pleasure. By the way, I was intrigued to discover that the novel contains 690 exclamation marks, so I’ve decided that if they were good enough for Cervantes, then I can use them impunity!!!

Don Quixote by Miguel Cervantes
Quixote: The Novel and the World by Ilan Stavans