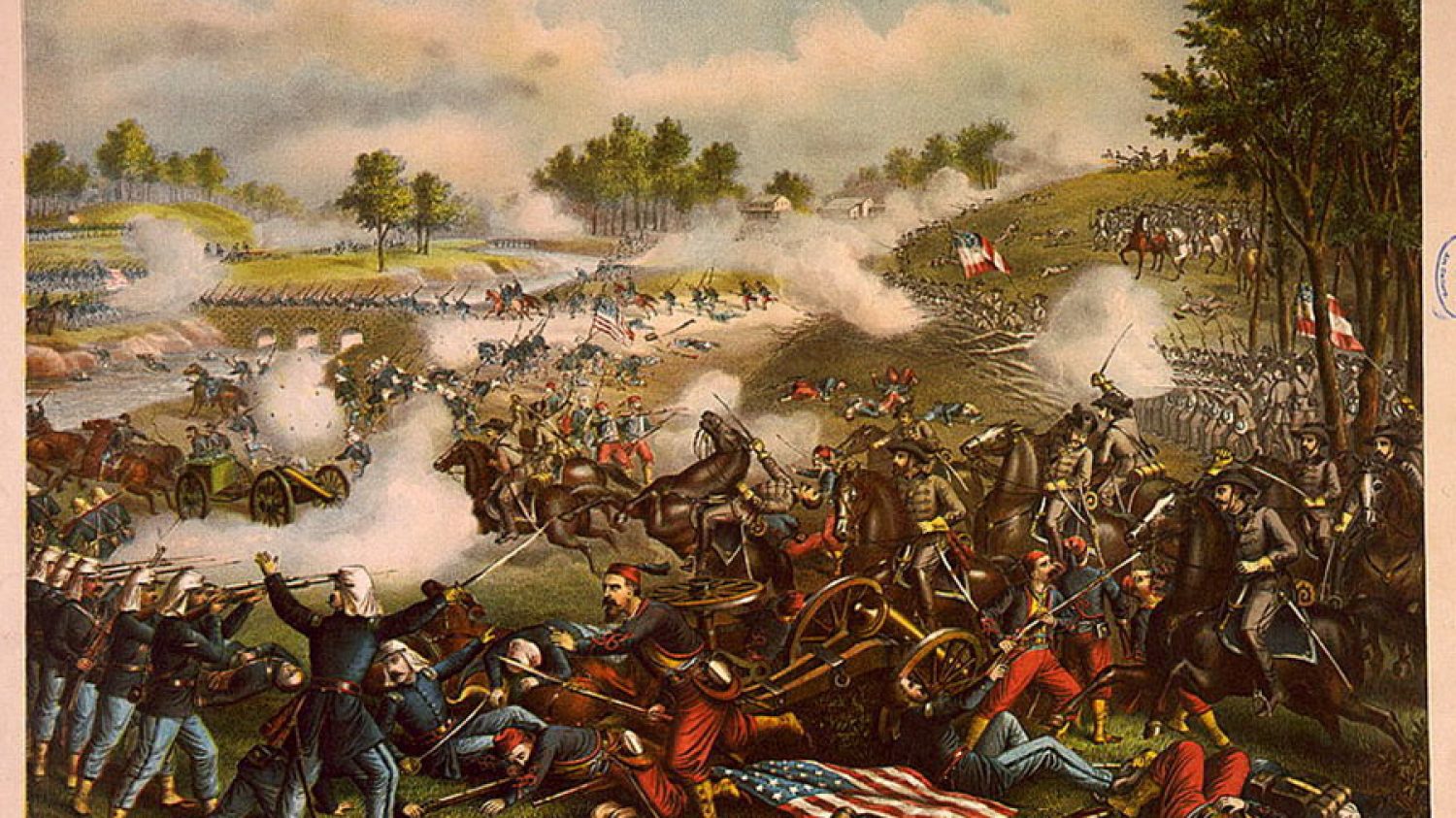 Killed at the Ford by Henry Wadsworth Longfellow

HE is dead, the beautiful youth,
The heart of honor, the tongue of truth,—
He, the life and light of us all,
Whose voice was blithe as a bugle call,
Whom all eyes followed with one consent,
The cheer of whose laugh, and whose pleasant word,
Hushed all murmurs of discontent.

Only last night, as we rode along
Down the dark of the mountain gap,
To visit the picket-guard at the ford,
Little dreaming of any mishap,
He was humming the words of some old song:
“Two red roses he had on his cap
And another he bore at the point of his sword.”

Sudden and swift a whistling ball
Came out of a wood, and the voice was still;
Something I heard in the darkness fall,
And for a moment my blood grew chill;
I spake in a whisper, as he who speaks
In a room where some one is lying dead;
But he made no answer to what I said.

We lifted him up on his saddle again,
And through the mire and the mist and the rain
Carried him back to the silent camp,
And laid him as if asleep on his bed;
And I saw by the light of the surgeon’s lamp
Two white roses upon his cheeks,
And one just over his heart blood-red!

Longfellow was a hugely popular poet in his lifetime. He is the only American poet to be honoured with a bust in Westminster Abbey. Today he is remembered for Hiawatha and The Midnight Ride of Paul Revere, but Killed at the Ford is one of his Civil War poems. 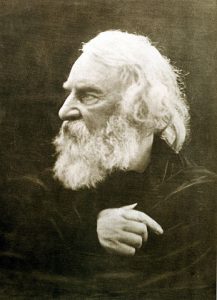 It is a simple narrative poem, telling of a nameless, handsome young soldier who was clearly popular amongst his fellow soldiers. He and his troop are out meeting a picket-guard by a ford, no trouble is expected and the soldier is humming a tune. But suddenly a shot comes from the woods and the young man falls silent. He is placed on his horse and taken back to camp. All this is narrated by one of his fellows, also nameless. This narrator then pictures the news of the death being carried to his family, just like another bullet from a gun. And that news appears to bring about another death – whether of the soldier’s mother or wife is not stated – from grief at hearing the terrible news.

The song sung by the soldier is about roses – red roses, the symbol of love. Those roses then become the white roses of his cheeks as the blood drains from his body, and a red rose for his heart where he has been shot. The heart image is carried into the next verse, when the heart of the woman who loves him ceases to beat.

The poem was first published in the Atlantic Monthly in April 1866. It is not known when he wrote it, but possibly in 1862 after the Battle of Manassas, when Longfellow recorded in his journal: “Every shell from the cannon’s mouth bursts not only on the battle-field, but in far-away homes, North or South, carrying dismay and death.” Longfellow deliberately keeps his poem vague – we are not told where the killing takes place, if the soldier is from the North or South, what his name is. He therefore comes to symbolise all the beautiful young men whose lives were lost in that terrible war. It’s a moving poem. The image above is an 1889 chromolithograph illustrating this battle, which was also known as the First Battle of Bull Run.

Longfellow’s life was a fascinating one. Have you read the murder mystery novel which features him as a character – The Dante Club by Matthew Pearl? Much of the action of the story takes place in Longfellow’s home in Cambridge, Massachusetts, which is today a fabulous museum to visit. I love mysteries with a literary theme and all the murders in this book connect to deaths in Dante’s Inferno. Gripping stuff!